The House Hunt was a success!

In July I mentioned that we were participating in a house hunt for a friend who is in Afghanistan and wanted a home for when he returns.  He gave us his criteria of price, bedrooms, features, and square footage.   Last week the search concluded, the deal is done, and the papers signed.  We had a blast!

Each week we would scour the new listings along with his wonderful agent Kelli and schedule appointments to do the look see often after doing a preliminary drive by to check it out.  We learned much along the way.  In previous house hunting it had often been what was called a buyers market.  A buyer would find a house they liked and make an offer often lower than the asking price and negotiations would begin with a conclusion usually resulting somewhere in between.

This was entirely different.  Houses that would come up on Thursday, we would look at them on the weekend and by Monday there would be up to 15 offers on the house!  I had never seen anything like it.  Often in the short time we were scheduled to be at the house there would be someone looking when we got there and someone else waiting to look when we were finished.  There was 4 of us including the potential buyer that had to change our strategy after missing a number of really good houses.  We had entered what is called a sellers market.

Yes, prices are still low, interest is still low, but the available houses was also low.  One would not know it by looking at Realtor.com because the listings shown include: short sales, foreclosures, contingents, pending, and active.  The first 3 types are really not available and they radically increase the houses that appear to be available.  The actives on the list were the only possibility but we had to sift through them all to the real potentials.  The next step was to make sure they met all the buyers criteria which included a large lot and RV parking.  In this area that reduced the choices down to an average of two to four to look at per weekend.  Because the area also had a high foreclosure rate many of these were trashed and had smells that one could not imagine unless experienced with their own noses.  There was more than one home where the front door was opened and we walked away without entering.

Through a process of trial and error we learned that the only way one was going to buy the desired house was to up the offer over the asking price and make it the BEST offer on the table come Monday morning.  In order to insure that this could be done we first had to lower our search criteria price to allow for the buffer.  Our ebay experience helped here and got the adrenaline flowing.

Mind you the potential owner is sitting in Afghanistan during the entire process.  After anyone of the four of us would find a potential home, he would review it, "his team" would go visit it and as a group would decide if he would like it, then we would take pictures and send them to him and give  our recommendations from "okay", "good investment", to the top recommendation which was "BUY IT NOW".  With him giving the approval the offer was in play.

It was so fun and crazy as we three women "the team" would discuss the pros and cons of the property and all the tidbits of positive or negative comments he had made on prior places so we got better at it and more unified as we went along.  One house that he was very excited about from the pictures and after seeing it we all had a flat "NO" and he stated that there was no way he would go against the word of three women.

After a few good deals were missed due to the competition the realtor found a house and an offer was made sight unseen by any of us.  Two days later the team of ladies went to look at it knowing the offer could be rescinded if it did not meet objectives.  We were more than pleased and the deal continued buy not without the expected multiple offers, renegotiation's, and haggling over the details.  The offer was almost pulled and just when it looked like it wasn't going through there was another turn around and all parties were able to come to an agreement.

The timing was absolutely perfect because the buyer was able to come and see the place in person before final papers were signed and he absolutely LOVED the place.

Making the deal even sweeter the renters who had been taking care of the place so well are staying on until he returns and are very happy that they don't have to relocate yet so they are able to meet their own house hunting goals in the future.

The pictures from Realtor.com have already been deleted but here are a couple to give a feel for the place: 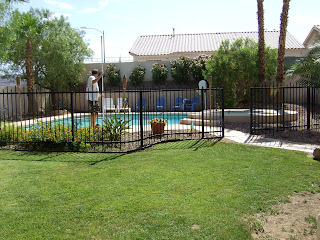 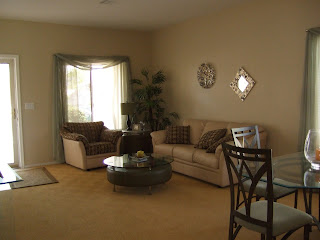 Yes, the carpet is Berber.  It also includes four bedrooms, 3 baths.  Even after all the haggling that was done the price was probably less than half of what it what it would have been five years ago.  For those who have been waiting for a time to buy or refinance the fed also just announced that interest rates are the lowest since the 50s.