More than you wanted to know about Wood Furniture

Q.  Do you know the motto for Walmart?
A.  Save money, live better.

Q.  How about Sears?
A.  Where America Shops

Don't get me wrong - I love Walmart and am there about once a month.  But the truth is that the longer or more exclusively one shops at Walmart the less one knows about quality.

I know people who would not be caught dead in wearing or buying something used.  In their minds new is better.  That's PERIOD.  Their noses practically turn up at the idea of hand me downs, give aways, or second hand stores.  Yet they happily shop at Walmart because they choose or cannot afford to go someplace else for new products.

As you know from previous posts garage sales get me excited!  I have found Coach, Nike, Levis, Bebe, Ann Taylor, Express, Guess,  Liz Claborne, Gap, Cuisinart, Kitchen Aid, Hoover, Princess House, etc.  This is just an abbreviated list but you get the idea.  In addition to clothing, furniture, everything one might need for a baby, and decorative items, practically new expensive exercise equipment is available.

In a previous post I shared our furniture shopping finds.  One item left on the list was a shelving unit.  Between the books, crystal, Mom's doll collection, and storage there is just no way there can be enough shelving in this house.  A spot had been designated in the living room for shelves when they were located.

Yesterday was Community Garage Sale day!  We were up at 5 a.m. and out the door at 7 a.m.  fresh and ready for the day.  We walked from house to house with all the other shoppers and everyone on the street was enjoying the almost festive feel of the day as each scouted for their own idea of treasures.

And there it was.  11 feet of wood.  Far larger than what we were looking for but something about wood draws me.  The price was higher than planned also.  $400.  That's almost more than all the other furniture combined.  But, look at the beveled glass.  But, it would take up the entire wall.  I began running my hands over the smooth dark finish and noting all the heavy glass interior shelves.  What a deal.  How could it be passed up?  The question was asked that would have been the deal breaker so we could go on with the shopping.  "Will you deliver?"  No trucks were in sight so we could walk away with a clear conscious.  The owner replied that he was a professional furniture mover by trade and could deliver it that afternoon.


In the meantime another shopper had approached and heard me singing the praises of the quality and as she listened intently I apparently cinched the deal.  One way or another one of us was going to buy it.  Who was going to get to the owner first.  So while I continued to run my hand over the wood the now competing buyers both headed to look for the owner and be the first one to put money in his hand. 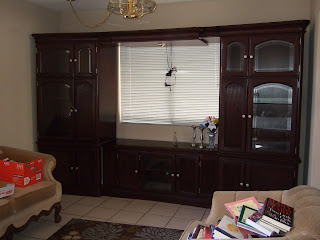 As you can see the fit is perfect.  The arrangement of the rest of the furniture is still being decided.

What kind of deal is it?  Out of curiousity an internet search was made to find a comprable item and the current retail price.  The picture is not the same in ornamentation but Signature Home Furnishings  is the manufacturer of both and the size and basics are the same.

The photo in the top does have the upper shelf but it is not installed to allow full access to the window.  The unit will not be used as an entertainment center and the top piece may also be removed to make it a more traditional looking book shelf and bench.  The two bottom side panels have exchangeable speaker covers and the bottom middle section has a replaceable wood piece if the glass is not desired.

My next step was to determine what kind of wood the new unit contained.  In the past I had often shopped the antiques stores and usually could tell at a glance what type a wood a piece of furniture was made out of as well as checking any drawers to make sure they were dove tailed joints. 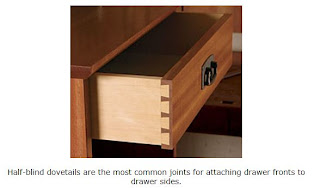 As I researched the wood type I found so many that I had never even heard of.  The following is from Your Antique Furniture Guide.  I thought it interesting enough to share in it's entirety.  The site has much more information if you are interested.  The pictures on their site can be enlarged to clearly see the patterns and colors

Amboyna: A yellowish-brown burred wood type somewhat between 'bird's-eye' maple and burr walnut. Used in the eighteenth century and on into the nineteenth, nearly always as a veneer, both for cross-banding and for whole surfaces.
Origin: East Indies.

Apple: One of the popular fruitwoods used in the solid country pieces in the eighteenth century, although it had some use as a veneer earlier. A light reddish-brown in color with some mild figuring. Fairly close-ground and hard.

Ash: A whitish-grey fairly hard wood used in country furniture in the eighteenth century and for drawer linings.

Beech: Brownish-whitish wood type with a distinctive flecked grain. Used in the solid from the 17th century for the frames of upholstered furniture (doesn't split when tacked). In the late Georgian and Regency periods it was painted, particularly in chair work. Early caned chairs of Restoration period were made from beech instead of walnut for economy and then ebonized.

Boxwood: A whitish-yellow color, without any figure. Used mainly as an inlay or for stringing lines from the sixteenth century.

Cedar: Reddish-brown, like a soft mahogany. Used for chests and interior work from the middle of the eighteenth century.

Cherry: Reddish-brown wood type. Used for country furniture and for inlay or crossbanding from seventeenth century. Also popular for American Queen Anne and Chippendale furniture. Usually used in the solid.

Chestnut: Ranges in tone from light to dark brown. Horse chestnut is light, almost white and mainly found as a drawer lining material. Sweet chestnut matures to a reddish-brown and is reasonably hard for a country wood. Used for legs and in chairs from the seventeenth century. In the 18th century for French provincial furniture made in the solid.

Harewood: This is just sycamore which has been stained to a greyish-green color. Much used in later eighteenth century and Regency as a decorative veneer.

Kingwood: A brown and black striped wood like rosewood, particularly used for crossbanding on tables in late eighteenth century. Was used previously in late seventeenth century also as a veneer.

Laburnum: Cut as plain veneer, a yellow-brown with streaks of darker brown. Cut as an 'oyster' very dark rich blackish-brown. Used as veneer from late seventeenth century, particularly in parquetry.

Mahogany: Rich golden-brown or red-brown wood type, excellent for carving and takes varnish very well. Can be finely polished and possesses a pleasing depth of tone. There are several types of mahogany; San Domingan, Cuban, Honduras and Spanish are most common.

Olive: Dark, greenish with black streaking wood type. Used in parquetry, as 'oyster' and in veneers, from late seventeenth century.

Padouk: Red, with blackish figure. Used in solid from mid-eighteenth century and particularly from early nineteenth century for military chests

Pine: Soft, pale, honey-colored wood used in England and America as a secondary timber for drawer linings, and in the 19th century for inexpensive furniture (which was often painted).

Plum: Yellowish-red wood type. Used for country pieces and as an inlay from the seventeenth century.

Rosewood: Highly figured dark red-brown wood with blackish streaks. Used from the sixteenth century, but most found during the Regency and Victorian periods in England in solid and veneer for high-quality furniture.

Satinwood: Light, yellow-colored West Indian wood, favored during the late 18th century. Usually used in veneers as it was expensive, and sometimes embellished with painted decoration. Painted satinwood furniture was also popular in the Edwardian period.

Tulipwood: Yellow-brown with reddish stripes. Used for crossbanding from the late eighteenth century.

Walnut: English walnut: golden brown with dark figuring. Much used in veneers from the sixteenth century but particularly 1660-1740. Also cut in burr and oyster form. Black walnut: also grown in England from the late seventeenth century and much darker. Used in solid and can be mistaken for mahogany at first glance. Walnut was also popular in America and in the Victorian era.

Zebrawood: Brown with dark stripes. Used as a veneer from the late eighteenth century.

If you have gotten this far you may now know more about wood and furniture contruction than you ever did before.  In fact, more than you may have wanted.

Has living In The Trenches and shopping the way I do caused me to feel cheated?  Not at all.  I have more interests, more appreciation, and more fun in the hunt.  I would feel poor and cheated if I had to go to Walmart and spend $750 on a chip board piece of furniture.
Posted by Carol Schultz at 8:00 PM

That was an amazing deal!

I do shop around, for the best deals, too.

Would never buy furniture from Walmart (did you see the recent news about them?) . . .

You got yourself a find! and good for you! You have been blessed.

It has been a long hunt but fun all along the way. We have seen some that we scratch our chins and wonder about but when the right one comes along the hesitation is gone.

We love older pieces. They have so much character, and we've found if we get things we really love, they all go together. It all started with being given a small writing desk as a child, then as young marrieds a curvy 80 year old sofa, then my grandparent's bedroom set.....