Would the lotto change everything?

When I was In The Trenches if someone would have asked me what did I need often my answer would have been "Mo Money".  Each day as I looked around and stressed over the next payment or expense the only creativity I could muster was that money would solve the problem.  Of course to a degree that would provide a temporary solution and change and solve my immediate needs but as time passed I learned that there was far more to be learned and gained from the experience.

Somehow the friends I made during those rough times primarily seemed to be older and in my parents and grandparents generation.  Maybe in retrospect this was because they had reached a place in life that they not only had the time for friendship but also that they were not as apt to measure or assess a person by the outward appearance or lack of appearance of prosperity.

Those that I met had been through the Great Depression.  They had weathered the storms of life and whether they were now prosperous or just making it they recognized that a better measure of a person was by their integrity and not by the kind of car they drove or clothes they wore.  The stories of their experiences made anything I was going through seem like a mere inconvenience or just a part of life and a challenge to overcome.

Today as I contemplated those who have now worked so hard, so long, and felt discouraged or angry and maybe like things were never going to get better I though of the lotto.  The ultimate "Mo Money" proposition.

If given the chance would you trade what you are now gaining in experience for winning the lotto?  I suppose many would as evidenced by the number of tickets that are sold.  I admit that I have succumbed to the temptation myself for a total investment/waste of $10 throughout my adult life.  Maybe it's because I like numbers and statistics I just can't get past the crazy odds.  I figure my chances are much better at finding a job or otherwise improving my situation than winning the lotto.

Just out of curiosity and a memory of a show I once watched about lotto winners I did a little googling  and found that even with so great of odds against winning up to 1/3 of the winners ended up worse after winning than before.  I include the following not as a roundup but to substantiate the thought that more money is not always the answer:
Why Lottery Winners Go Bankrupt
1 in 3 Lottery Winners Broke Within 5 Years
Powerfall - $27 Million Dollar Lottery Winner Broke

So what then is the answer?  For those who seek to find one it will be as personal as the circumstances and may not be apparent until the situation changes.  Not meaning to sound ambiguous however this is what happened to me.  It was not until months and even years later that I was able to appreciate and see what I had learned.  Yes, at the time I was learning some very practical skills but what I did not recognize at the time was that the experience was in fact changing ME and not just my finances.  This is what took me longer to see or understand.  When things did turn around I was making different choices, I responded to things with different emotions.  What I thought of as hardships had refined and changed me.  Some things I appreciated more and some had value no longer.

Whether you are now in the recovery stage, plodding along, or still feeling like you are in free fall in the end there will be change and experience.  If you have received some lemons you will know how to make lemonade. 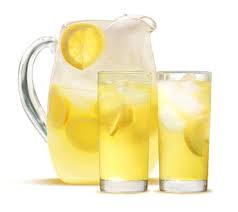 Would it be fun to win the lotto?  Yes.  For now we may have to be content with a nice tall glass of lemonade.  And, who knows, in the end we may be better off for it.
Posted by Carol Schultz at 10:00 PM

I have heard of exactly one family that tried to manage their lotto winnings well(on Get Rich Shlowly). . .other than that, it just seems like that old hip hop song for many winners: mo money, mo problems.

In our state, lotterys are illegal. I bought one ticket when I went to NYC. I bought the ticket just to do it. Winning the lotto would change everything for me, mainly because I know exactly who my friends are. I would be sooo tight except in education for my grandchildren, and house for my daughter, one she could afford to maintain, not a mansion. As my blog title says, I am parsimonious. Even with loads of money, I don't think that aspect of me would change.

The best thing about the lotto is it helps us dream our dreams and some of them really can come true. Thanks for commenting Diedra and Linda!