For those of us who read financial blogs we know that often the comments, discussions, and arguments of the readers are often more interesting than the blog post itself.

The Changing Value of Hardwork posted by The Simple Dollar on October 27 was one such article.  Trent threw out an idea and the readers seemed to pounce on it and then on one another in the fray.  Below is a portion of one comment made that stirred me to jump in.  I am not trying to misrepresent the writer in any way so please go back to the link to read in it's entirety if you are interested:

"...In the not so distant past, middle class Americans could afford to have a servant (live-in or daily) and meet basic needs on ONE income. Now that is no longer true. To meet basic needs for a family takes TWO incomes, and I don’t know many middle class homes with servants. Though dishwashers, laundry machines, etc. take over some of that labor..."

My Response:
As a child raised in the 50's and 60's I can definitely state that what was considered "the basics" and supported by one income is not what people now consider the basics.  I was raised in a well off suburb and most of the families had one car, 1 b/w TV, no computers, no clothes dryers, did not drive the kids all around because we were expected to walk or ride our bikes.  We watched a movie as a treat maybe once every 1-3 months.  We reused our lunch sacks, had one phone, and long distance calls were for emergencies (like deaths) only.  The hired help was usually a teenaged girl getting paid 50 cents an hour and happy to have the opportunity to earn some money.  The boys helped with yard work.

The "need" to have two people working to support a home was created primarily by my own generation who wanted and expected it all the day they moved away from home and wanted even bigger, better, and faster - even if it meant going into debt to get it.  That is one of the major reasons we are now dealing with what is called the "American Economic Crisis".

What stuck me full force with her comment was that in retrospect only one generation prior to mine even in the well off suburbs of America the spending habits would be considered frugal by today's standards and actions.  Go back one more generation and we had those who lived through the depression as adults and worked from before dawn to long after dark in homes that had wood heat, often no insulation, and were just getting electricity.

As a child I remember we went to Seattle only once or twice a year to shop or visit family because it was "too far away" and gas cost money.  It was all of 10 miles.

We are probably living in the most lavish time and generation that has ever lived.  We have the most and we take the most for granted and call it a necessity.   Someone recently said "there are millions around the world who would love to come to America just to be poor".  Point well made.

If there is one vivid memory of the way in which we were raised it was that we were expected to bring home our brown paper lunch sacks daily and keep them in the condition that we would be able to use them for a week.  Waste of any kind was discouraged and the expression "Waste Not, Want Not" was oft repeated.  People didn't talk about green or frugal living but lived by the motto "A penny saved is a penny earned".

It was a top priority that a mother was able to stay home and care for her children so people were willing to do without in order to accomplish this.  It is not so much that our economics have changed as it is our priorities and standards have changed.

My mother was unusual in that she was divorced and did not remarry, this was very uncommon among the kids I went to school with.  Mom received no child support and on her single salary made sure that my brother and I had good medical care, braces on our teeth (not covered by insurance), music through the school, annual family vacations, and my brother played soccor.  We always had food on the table and a warm bed to sleep in.  We were able to attend summer camps but were expected to do any "earn your own way" options that were available.  We also earned our own spending money.  We did not have everything that the families who had a father as the head of the family but one thing was always clear: we were my mom's top priority.  I don't ever remember her going out for the evening to have a good time without us.  If we were not all together she did not go.

Although mom was gone when I came home from school, making me one of the original latch key kids in our area, all the neighbor mothers were home and I shared in their home baked cookies, went to the girl scout meetings hosted in their homes, and shared in their after school activities until mom came home after a long days work. 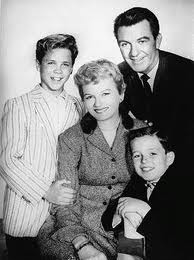 Beyond that our lifestyle was not much different from one another and often when it was time for their fathers to come home it was my signal to go home so many of the fathers I never met.

Every family on the block had a hot meal waiting. One could hear the call to dinner as mothers stuck their heads out the door to call the kids.  For some it might have been macaroni and cheese and for others steak but nonetheless it was the way we lived.  Nowadays many people may laugh at Leave it to Beaver but it was definately a good way to grow up.  Parents worked hard and sacrificed much to provide this model of home for their children.

I share this mainly to set the record straight.  It is easy to draw conclusions and assume that the rise in the two parent working family is a necessity while overlooking that it is a choice made up quite possibly of a series of many little choices.   I just can't imagine Wally and the Beav or anyone I knew for that matter being in what is now being referred to as "generation rage". There was just not that much to be mad about.  Even in areas that were experiencing difficult times would work through them in hardworking decent ways.

Making these little choices today is just as possible if not more so than they were in the 50's and 60's.  It all depends on our priorities.

For more about the lifestyle of the good ole days:
In The Trenches - Recycling
Posted by Carol Schultz at 10:00 PM

Email ThisBlogThis!Share to TwitterShare to FacebookShare to Pinterest
Labels: Frugal Living, Kids, Living UNDER Your Means