"Since beginning the U.S. Marine Corps Reserve Toys for Tots Program in 1947, Marines have distributed more than 452 million toys to more than 209 million needy children. This charitable endeavor has made U.S. Marines the unchallenged leader in looking after less fortunate children at Christmas." 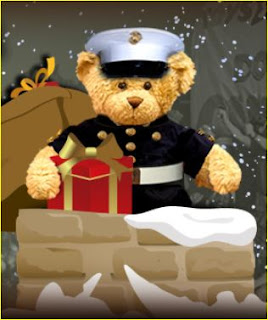 This information was taken from the Marine Toys for Tots website and the history of the organization is a Christmas story in and of itself reminding us that our soldiers serve our communities in so many important ways.  I had to laugh at the start of the organization:

"Toys for tots Began in 1947, when Major Bill Hendricks, USCR and a group of Marine Reservists in Los Angeles collected and distributed 5,000 toys to needy children. The idea came form Bill’s wife, Diane. In the fall of 1947, Diane crafted a homemade doll and asked Bill to deliver the doll to an organization, which would give it to a needy child at Christmas. When Bill determined that no agency existed, Diane told Bill that he should start one. He did. "  Another reminder of the old saying "behind every good man stands a good woman" and that the Marines just keep making a way where there is no way.

Looking through their website I was throughly impressed.  Did you know they ran a literacy program?  I didn't.  And, their list of corporate sponsors were top of the line.

Christmas is such a wonderful time of year to recognize and acknowledge the generosity of others and be a part of it as we are able.

Email ThisBlogThis!Share to TwitterShare to FacebookShare to Pinterest
Labels: Christmas